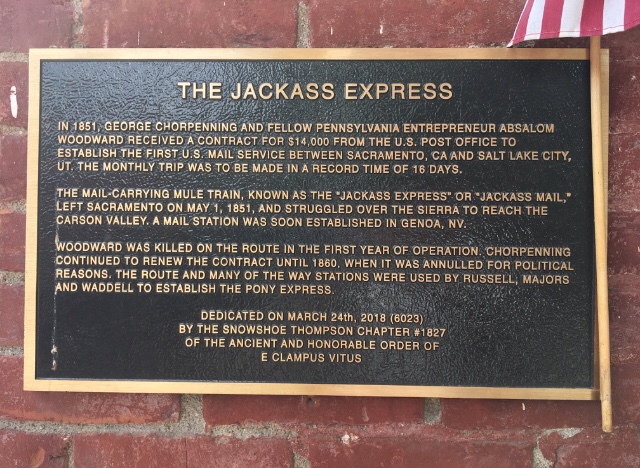 In 1851, the United States Post Office awarded a contract to George Chorpenning and to Absalom Woodward to establish the first mail route between Sacramento, California and to Salt Lake City, Utah. The route would become known as “The Jackass Express” and later as “The Pony Express”. George Chorpenning and Absalom Woodword began their standard “thirty day mail service” in May 1851.

For their passage, Woodward and Chorpenning chose the old emigrant route from Sacramento to Salt Lake City. The length of the route was approximately 750 miles, and ran via Folsom, Placerville, and over the Sierra by the old emigrant road, through Strawberry and Hope Valleys into Carson Valley, through Genoa, Carson City, Dayton, Ragtown, and then across the Forty-Mile Desert to the Humboldt River, near the Humboldt Sink; then following the old emigrant route east along the Humboldt River to what is now Stone house Station, on the Central Pacific Railroad near which it left the river and turning to the southeast, took the Hasting’s Cutoff to Salt Lake City.

During the initial year of service, Woodward and Chorpenning encountered a multitude of challenges. Service was delayed by heavy snow in the Sierras, which caused the trip an extra sixteen days to reach Carson Valley from Placerville; then they met June snow in the Grouse Creek Mountains west of the Great Salt Lake. The trip took not the required thirty days, but fifty-four days. To add to matters, during the November mail delivery, Absalom Woodward was killed by Shoshone Indians near Stone-House station, just west of the Malad River. To worsen affairs, deep snow in the Sierras prevented the December 1851 and January 1852 mails from ever crossing the Sierra Nevada mountain range from Placerville.