The San Jose Historical Museum was founded by Clyde Arbuckle and Theron Fox, whom were both active members of the California Pioneers of Santa Clara County. In 1945, Clyde Arbuckle was hired as the San Jose City Historian. Soon after, in 1949, Clyde Arbuckle became the curator of the State House Replica. 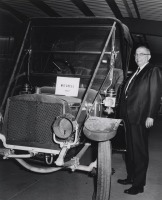 Theron Fox served as president of the Historic Landmarks Commission during the 1960s, receiving an American Association for State and Local History award from Clyde Arbuckle’s nomination.