The Año Nuevo State Park is the site of a historic lighthouse that was constructed in the 1860s, at the same time a wharf was built. The lighthouse was abandoned after World War II and was left into disrepair. Decades later, oceanic waves hitting the lighthouse and erosion form storms cause that structure to fall over. At the time the light house was discontinued, fog horns and lights along the ocean have been utilized as signals to ships that they are near the shore. 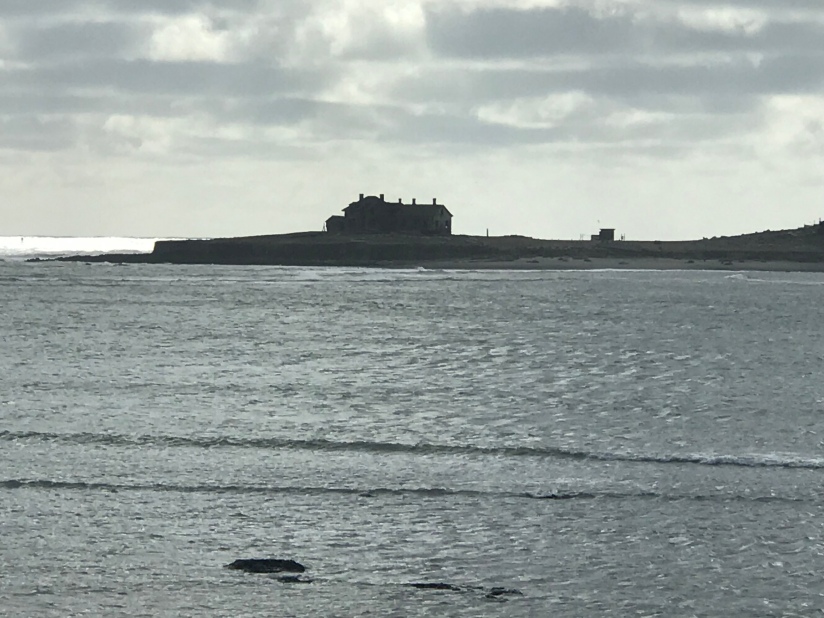 Isaac Chapman was a photographer who developed a collection of photos of the coastal towns between Santa Cruz and San Francisco. 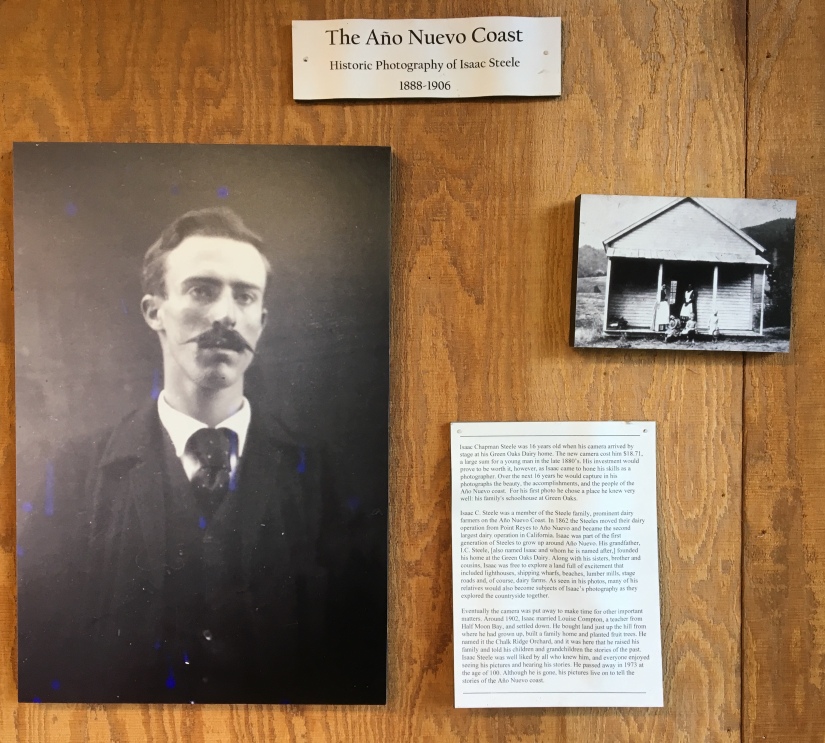 The Dickerson Barn and other structures built near it are utilized as visitor areas at Año Nuevo State Park.

Presently, the main draw to Año Nuevo State Park is the thousands of elephant seals that migrate to the park grounds. Tens of thousands of years ago elephant seals lived on California Islands during breeding season to stay away form sabertooths and Grizzly bears. As both sabertooths became extinct and bears were reduced in numbers, the elephant seals began to live on the islands and on the shorelines.

In 1941, during the beginning of the American involvement in World War II, the United States Federal Government purchased a third of Caroline County, Virginia which included various small towns. Several historical buildings such as churches and schools, were demolished during the construction of the Army base.

Liberty Baptist Church, which was built in 1850 and is the only church that U.S. Army currently uses within the grounds of Fort A.P. Hill, is the only pre-1941 religious structure that exists in the base.

My great uncle William “Bill” Henry Russell had served as a U.S. Air Force Pilot in World War II, the Korean War and in the Vietnam War. After over thirty years of service, William Russell achieved the rank of Lieutenant Colonel. My great uncle passed away in Hampton Roads, Virginia In July 2009. Bill’s wife Lillian Newkirk passed away in 2014.

In October 2009 and in 2014, William and Lillian were buried in the Arlington National Cemetery where Presidents William Howard Taft and John Fitzgerald Kennedy are buried.

In 1942, John Hopkins University Applied Physics Laboratory was established to help create the proximity fuze, known as the VT Fuze, that was instrumental in improving American site defenses during World War II. Since the era of the space race, the John Hopkins University Applied Physics Laboratory has worked with NASA to develop deep space research and other space technologies.

In January 2018, I had the opportunity to visit the National Air and Space Musuem with my older sister Linda Hamilton and a couple of friends.

The musuem exhibits aircraft from the age of air pioneers as well as those used in multiple wars, capsules from the Mercury and the Apollo missions during the space race, and fragments of meteorites form space.

Various posters showed that during World War I there was a great emphasis placed on the manufacture of airplanes for the war effort. A large federal building and courthouse complex was constructed in 1993 as part of an Oakland revitalization project. In 1999, President Bill Clinton signed a bill authorizing that the building be renamed to the Ronald Vernie Dellums Federal Building complex. Ronald Vernie Dellums was a prominent civil rights activist, a congressman, and the 48th mayor of Oakland. 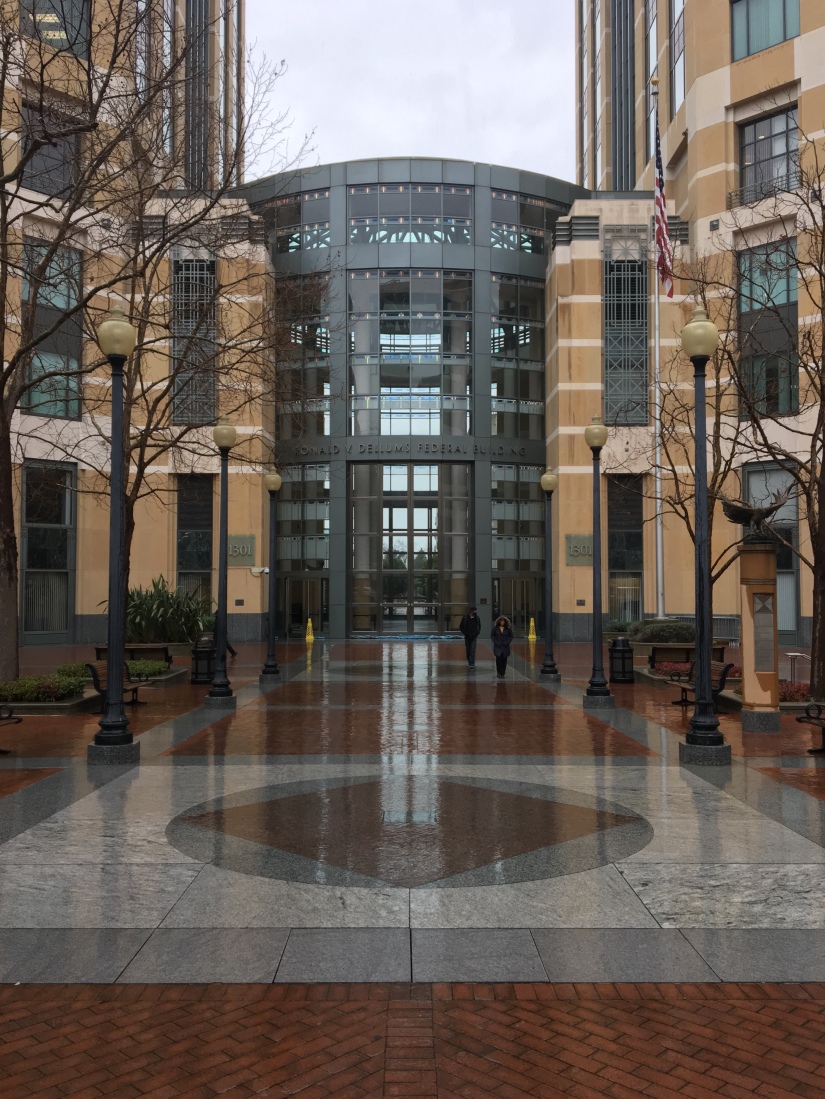 The building has a sculpture garden that pays tribute to civil rights activist Judge Donald Pitts McCullum, whom was born in Little Rock, Arkansas. Judge McCullum was a member of the NAACP and took legal actions to end the segregation of high schools in Oakland.

Inside of the federal complex is a wealth of photos of the Bay Area including some of the production of Chevrolet vehicles in the early 1900s and Lawerence at the site of the construction of an extension of the National Livermore Laboratory within the University of California Berkeley campus. 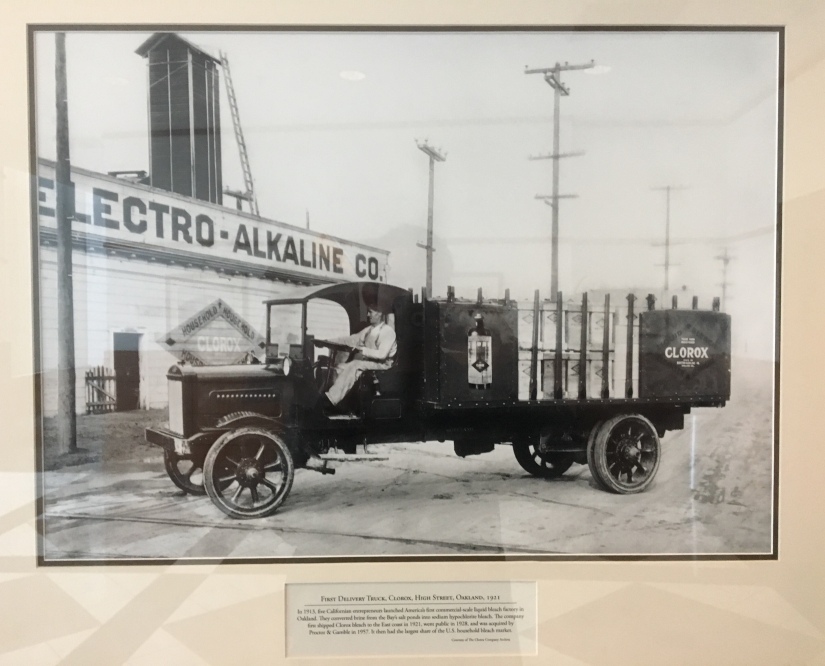 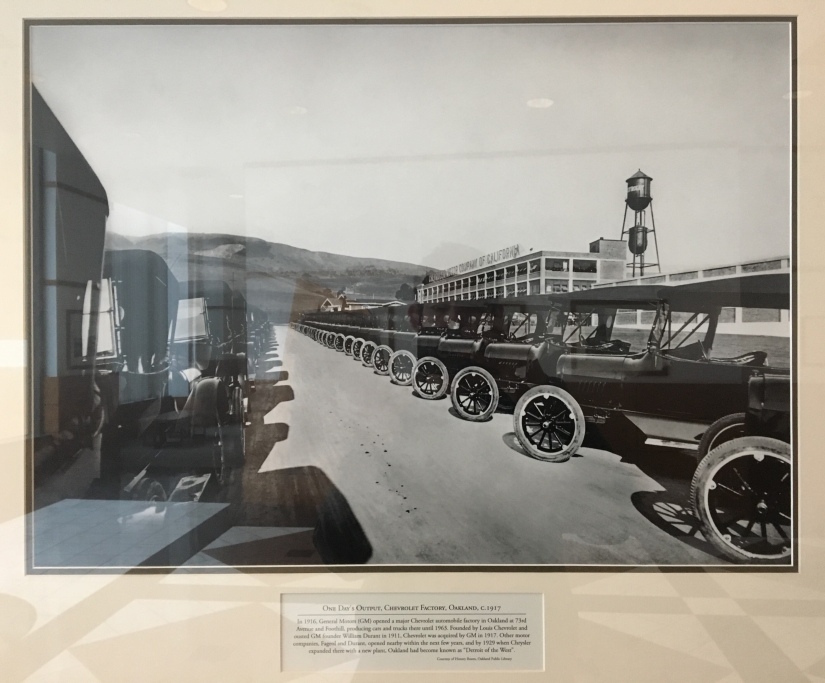 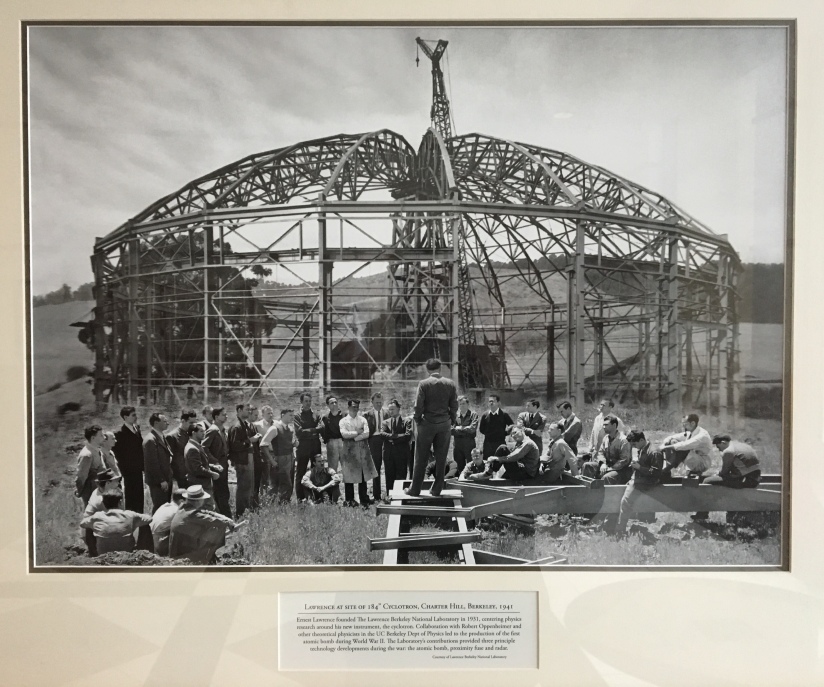 Other photos showed the early history of the east bay. 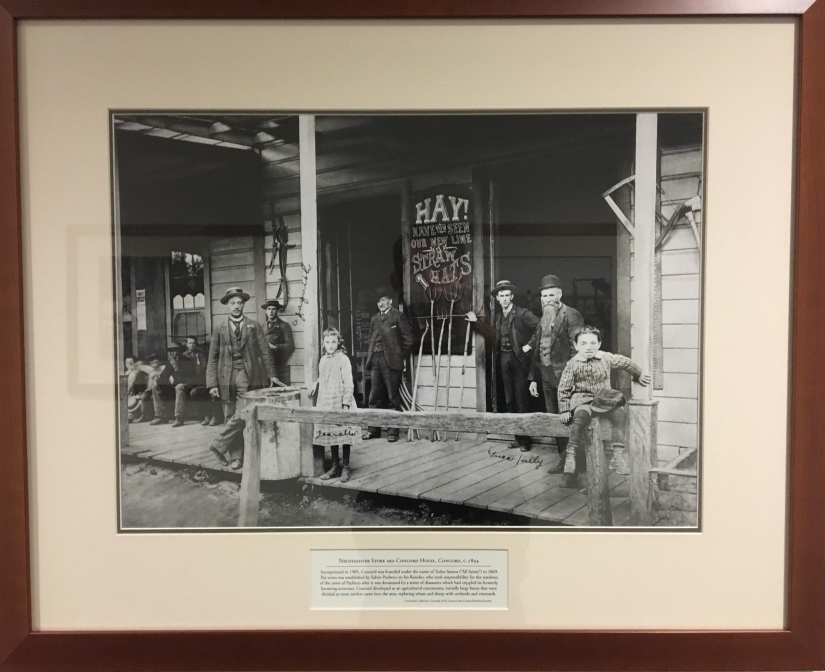 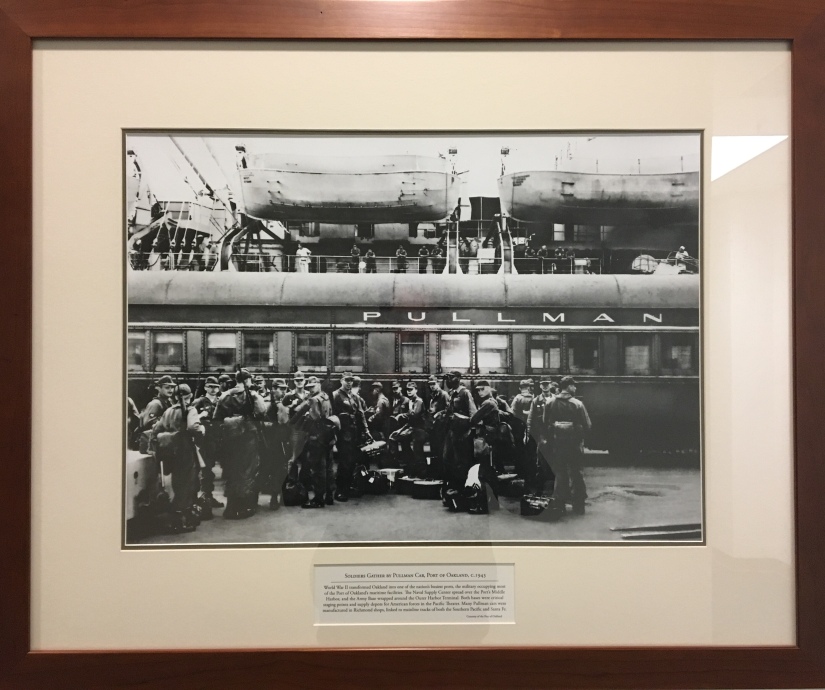 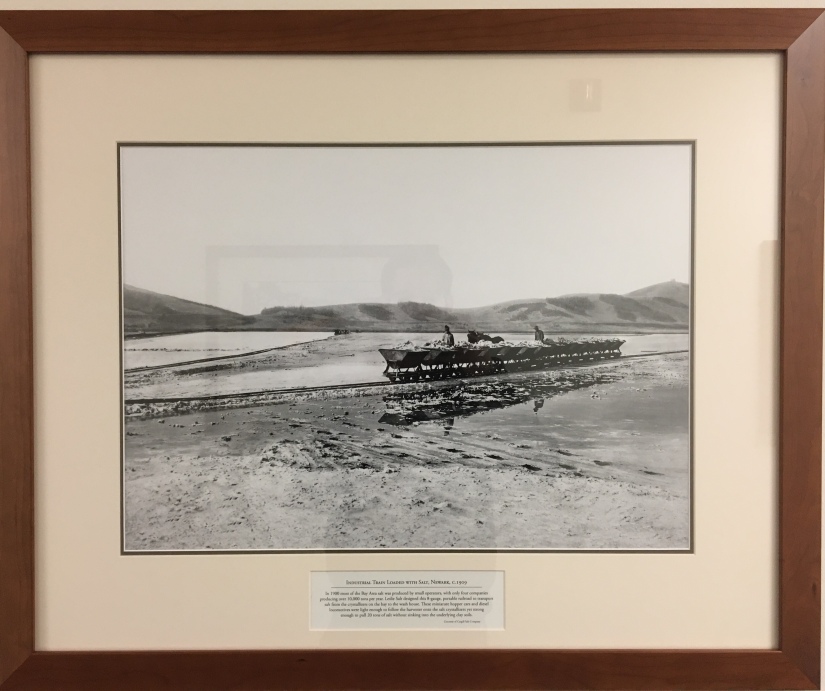 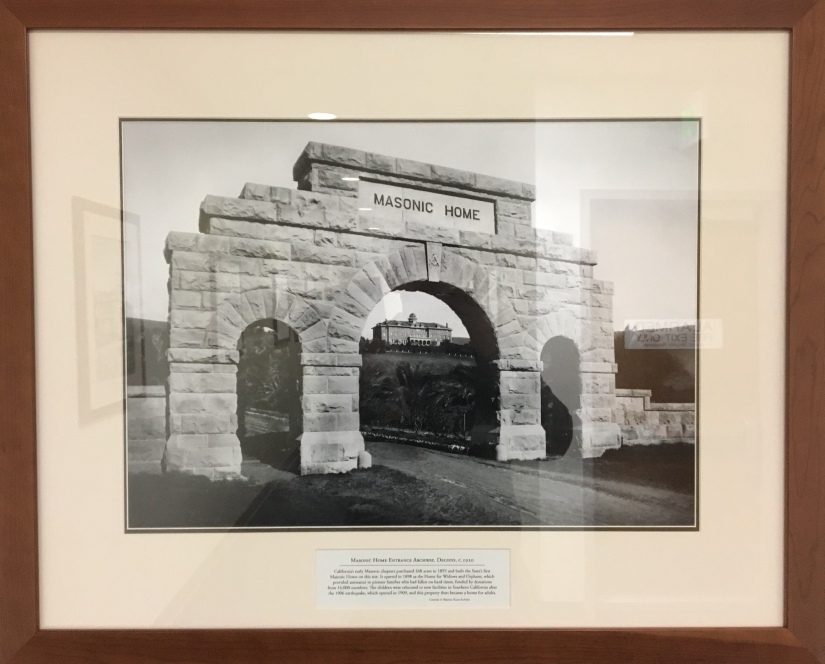 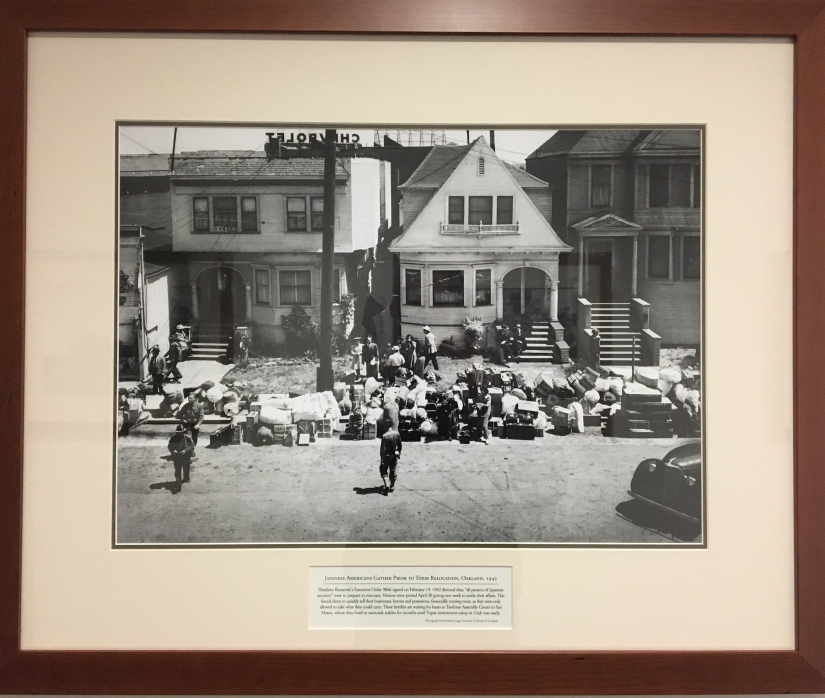 There were photos that showed the construction of the Oakland Coliseum, the first BART station, as well as a car factory that was eventually bought out by Tesla in 2010. 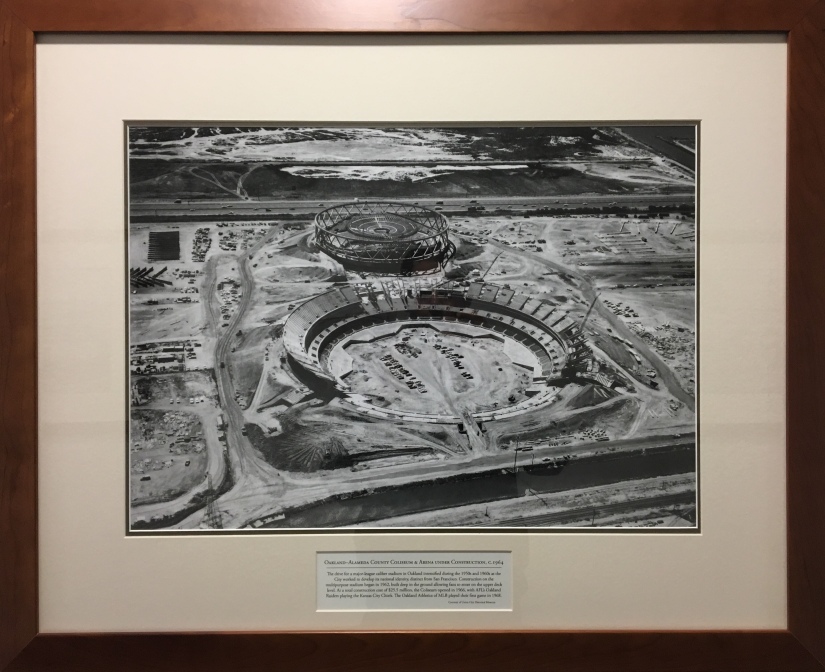 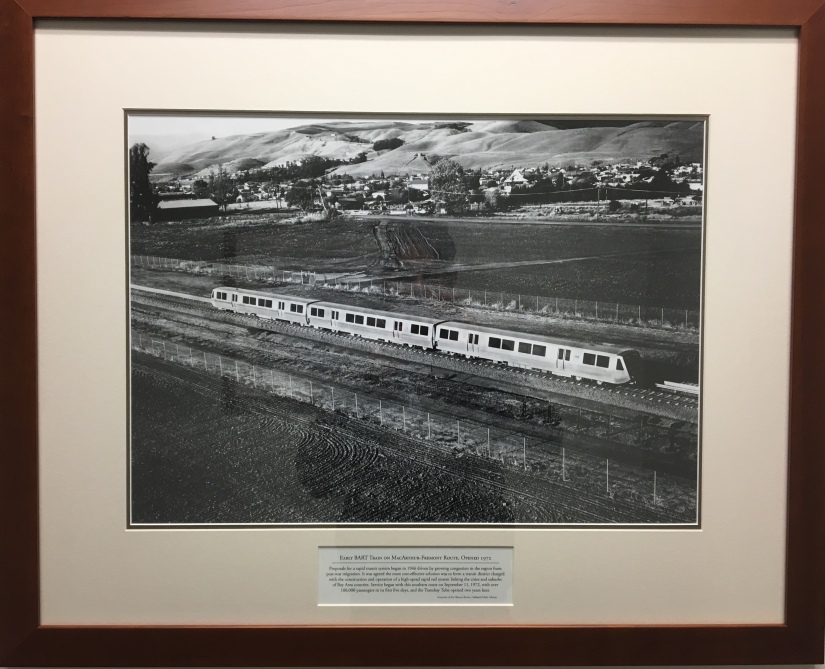 Another photo showed President George H.W. Bush visiting the Cypress Street viaduct that had collapsed after the 1989 earthquake.

The Mount Diablo watchtower was built in the 1920s, by an oil company that was operating in Concord, California. After Pearl Harbor, the light at the tower was turned off to prevent Japanese aircraft from being able to see targets on the ground, in the event their forces had been sent to the bay area.

The light tower remained unused after the end of hostilities with the Empire of Japan. In present day, the inside of the tower had the Mount Diablo Summit Museum.

The museum consists of the geologic history and an anthropology of the natives in that region.

The mountian had various names given to it by the natives and by the Spaniards.

In addition, inside of the museum has a casted price if the top of the mountain for visitors to touch. 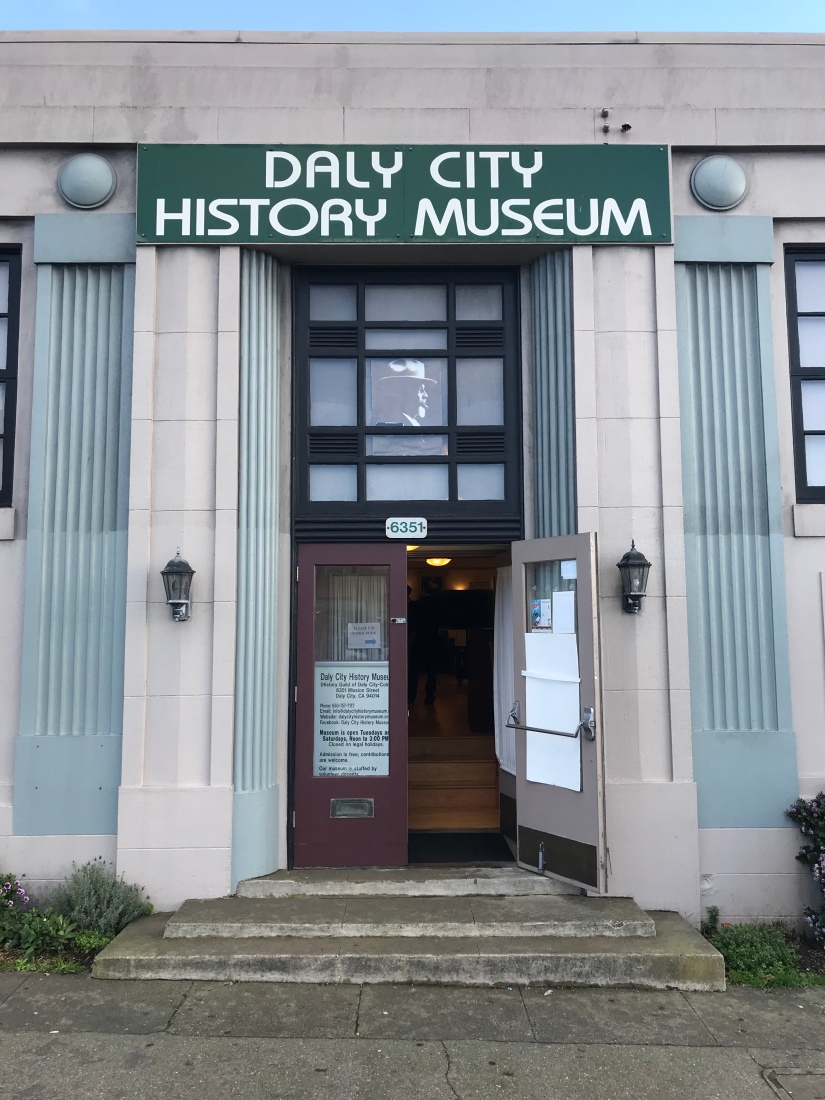 Robert Thornton moved to Lake Merced and became the first American resident of the lands within Daly City.

John Donald Daly, the owner of San Mateo Dairy, provided food and housing for individuals who lost their homes due to the 1906 earthquake. For John Donald Daly’s act of goodwill, the local government named the lands John lived and worked in Daly City.

After the earthquake, John Daly established a mansion in San Francisco for his family. The mansion still stands in present day. 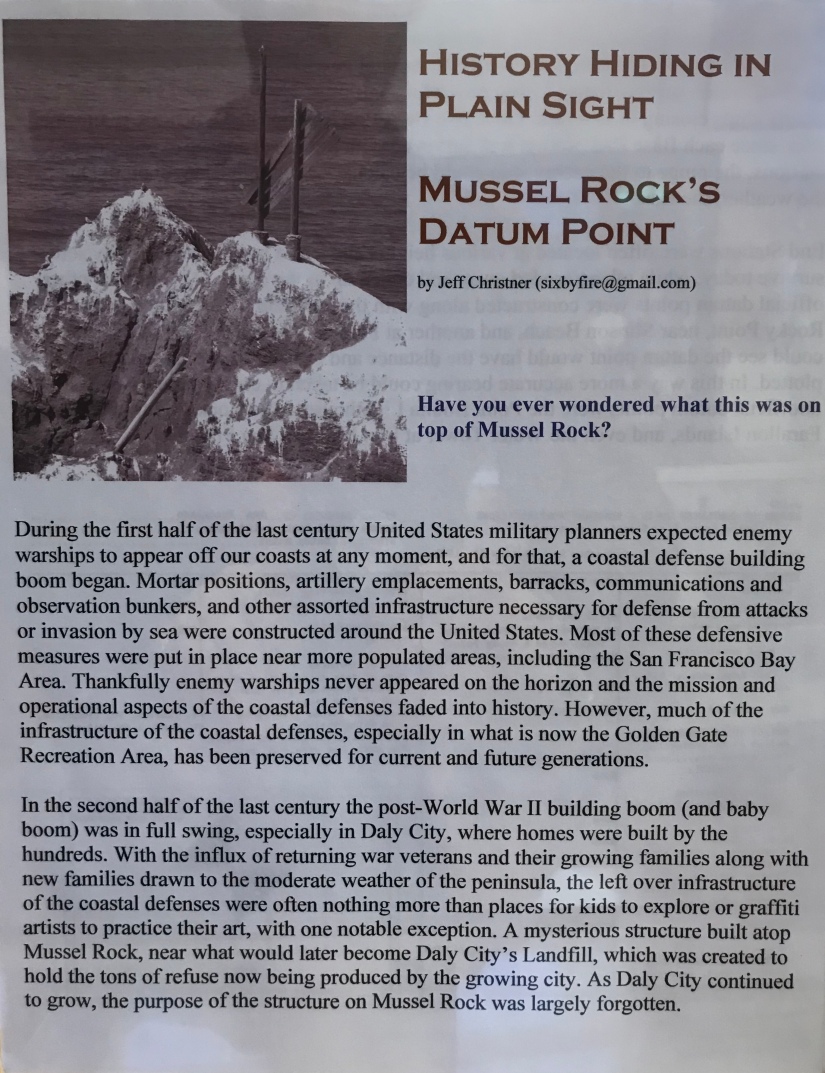 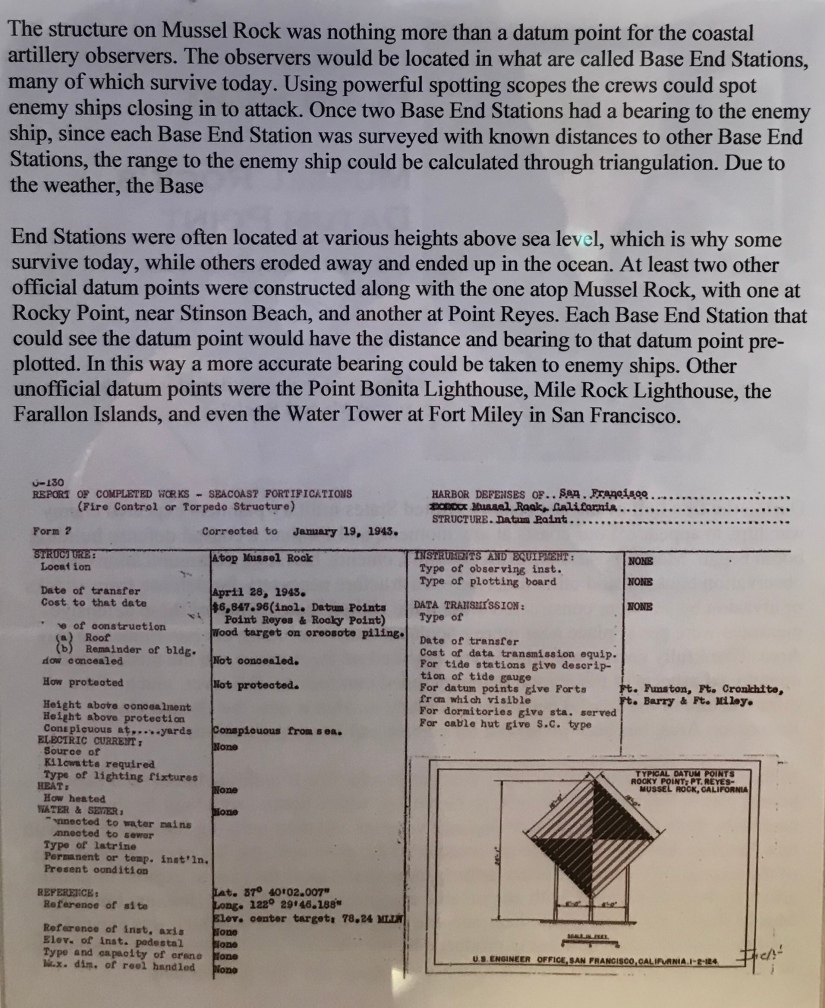 During World War II Mussel Rock’s Datum Point was an army post on the watch out for Japenese warships. During the war, there were other datum points at Point Bonita Lighthouse, Mike Rock Lighthouse, the Farallon Islands and the Water Tower at Fort Miley. 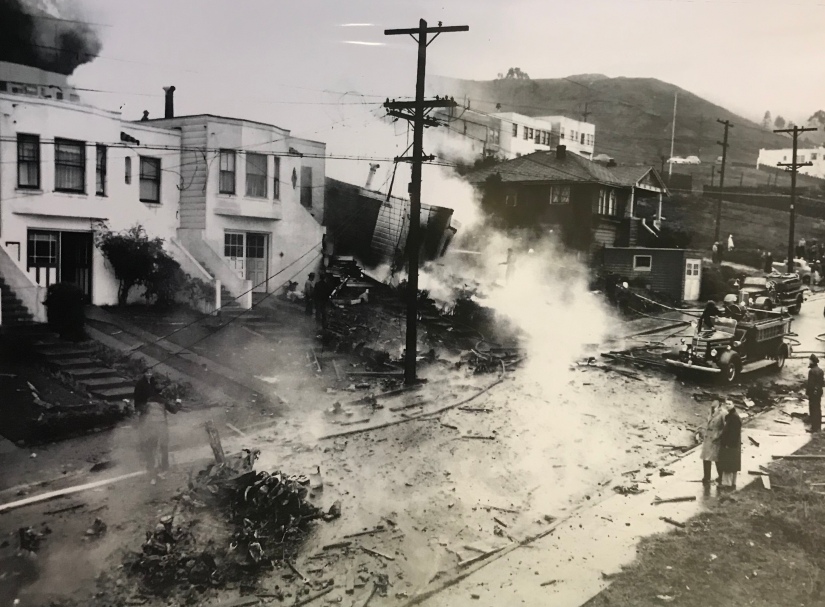 An army plane had crashed within a residential district in Daly City during the World War II. 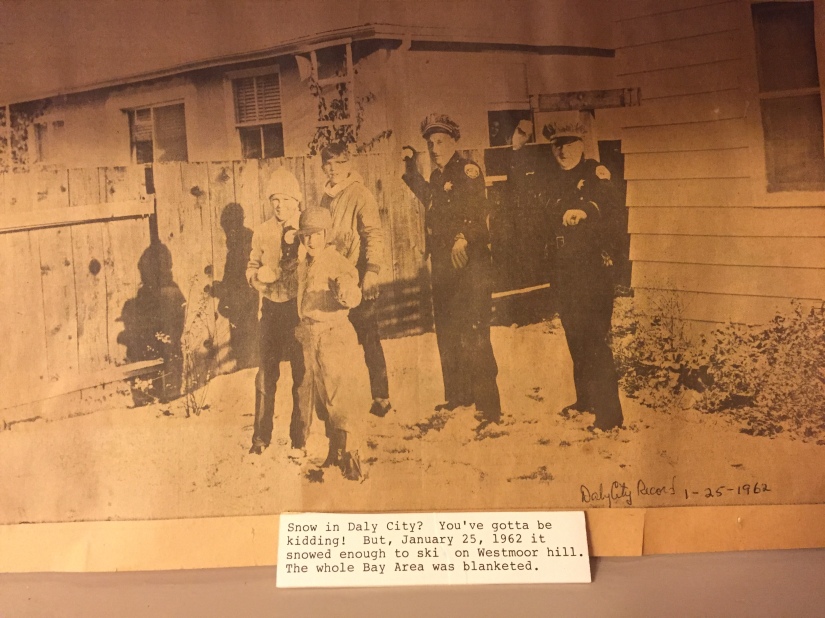 There was a rare snowstorm that occurred in the Bay Area in 1964.

The musuem also featured historians Ken and Bunny Gillespie, whom were both prominent local historians. 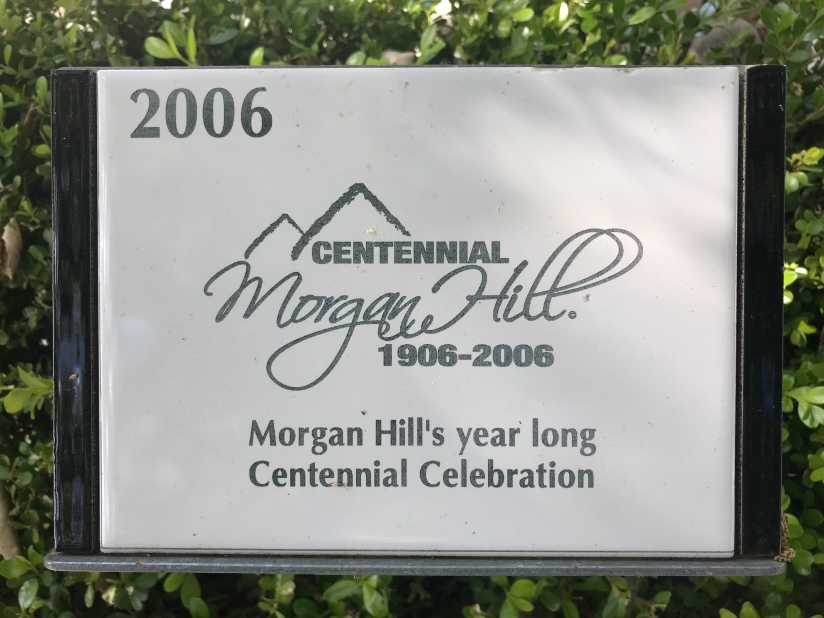 The Centennial Trail Of Morgan Hill was dedicated in 2006 and provides insights of a vast amount of local history in the Bay Area.

A Masonic lodge was established in 1916. 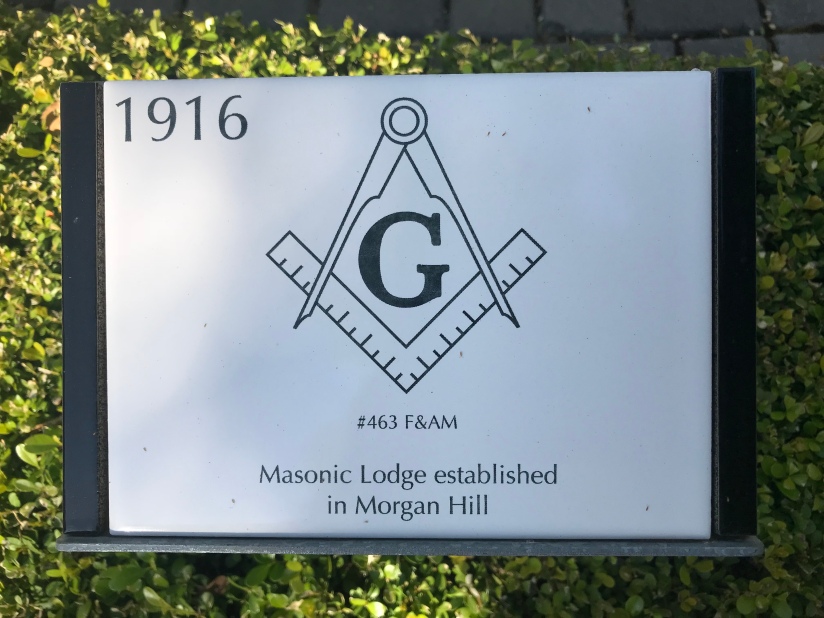 The Crown Prince Gustaf Adolf and Crown Princess Louise of Sweden visited Morgan Hill for a dedication of a resort in the county.

During World War II several Japenese Americans from Morgan Hill, whom had been interned, had served in the US Armed forces after their internment.