In 1864, Harriet Brice, a former slave, bought her first home within Union occupied Falls Church, Virginia; across the street from a church that George Washington used to attend. A historical marker was placed in front of the home that former slaves Harriet and George Brice used to live in.

In the 1940s, when the construction of the Pentagon was complete, it became the largest low rise building in the world. When Al-Quedea crashed a plane into the Pentagon, it created substantial damage from the blast and the fires, but only part of the building was destroyed, unlike the World Trade Center buildings which were completely destroyed.

Due to the the attacks on the World Trade Center In 1993, Murray Building in 1995, and the Pentagon and the World Trade Center In 2001, architects have established ways to reinforce buildings with ultra-high-performance fiber-reinforced concrete. The Pentagon was redone with reinforcements, in the event an enemy of the United States plans to execute a plane, missile or other type of attack against the building in the future.

Author Philip Andrew Hamilton, was in English class at James Madison High School, when he first witnessed the footage of the World Trade Towers struck by two airplanes. The administration of James Madison High School, and several other schools within Fairfax County, Virginia, decided to end the school day early due to their proximity to the Pentagon in bordering Arlington County.

Fairfax County, Virginia was the site of a multitude of action during the course of the U.S. Civil War, with the largest battle being the Battle of Ox Hill, during the Union retreat from the Battle of First Bull Run.

On June 1, 1861, the Battle of Fairfax Court House became the first land engagement of the American Civil War, with the first death of a soldier in action and the first wounding of an officer, after a Union scouting party clashed with the local militia guarding the Third Fairfax Courthouse. 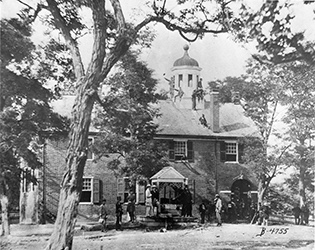 During the course of the U.S. Civil War the Fairfax Courthouse was damaged several times as the structure changed hands between the Confederacy and the Union.

In present day the Fairfax Courthouse is the site of the Historic Records Center.

The roots of the U.S. Army Reserve Officer Training Program, that was officially formed by an act of Congress in the 1900s, began in 1819 with Captain Alden Partridge, a former superintendent of the U.S. Military Academy at West Point, New York. Captain Partridge established the American Literary, Scientific and Military Academy in Norwich, Vermont and established the concept of producing “citizen-soldiers”.

The Patriot Battalion of the George Mason University Reserve Officer Training Corp (ROTC) Program was a subordinate of Georgetown University before becoming its own independent battalion in the year 2000.

George Mason IV and his son William Mason were both serving in the Fairfax Militia, that George Mason IV started in 1774, during the Revolutionary War. No major battles occurred within Fairfax County during the course of the Revolutionary War, yet residents feared that the British army would occupy the county of about ten thousand people to destroy Mount Vernon, the home of Commander and Chief of the Continental Army George Washington and it’s surrounding areas. When Washington was appointed commander of the Continental Army on June 14, 1775; he left Mount Vernon soon after his appointment and would not return to his home until six years later. It is likely Washington did not go back to Mount Vernon during most of the war to prevent the British from making it a target. 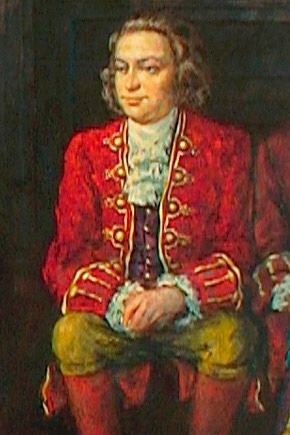 Captain John Smith was one of the first Englishmen to record life in what would eventually become Fairfax and Arlington Counties, During his travels through the Potomac River. In 1649, King Charles II of England granted all of the land between the Rappahannock and Potomac Rivers to a group of seven Englishmen.

Eventually, in 1719, this land came into the possession of Thomas Fairfax, sixth Lord Fairfax. In 1742, Fairfax County, which was named after Thomas Fairfax was established by the Virginia House of Burgesses. The Sixth Lord of Fairfax has a family whose land grant included all of Northern Virginia. Therefore, in the future parts of Loudon County would be formed form Fairfax, County.

Before the U.S. Civil War, James Ewell Brown Stuart was present when John Brown’s abolitionist riot was in full force. Stuart, along with General Robert Edward Lee, assisting in suppressing the abolitionist riot.

While stationed in Fredericksburg, and a large portion of the Confederate Army was in Caroline County, J.E.B. Stuart led a Christmas raid into the Fairfax Courthouse and Vienna, Virginia.

Later in the war, Confederate Calvary commander J.E.B. Stuart was killed in battle by an unmounted Michigan Soldier in May 1864.

In January 2018, I drove from San Jose, California, to my birth-town of Norman, Olkahoma, to Virginia to visit friends and family along the way. While in my hometown of Fairfax, Virginia, where I had gone to George Mason University, I took time to visit civil war battlefields in Fredericksburg, the former confederate White House in Richmond, as well as a musuem dedicated to President Monroe. I drove to Pennslyvania to see the crash site of the single plan that was taken down by heroic Americans who took stand against Islamic extremists on September 11, 2001. On the way back to San Jose, California I visited the “Little White House” in Georgia that President Franklin Dwight Roosevelt has died in, the Alabama State Capital building, the Edmund Pettus Bridge where the civil rights event of “Bloody Sunday” occurred, Mardi Gras in New Orleans, the former Louisiana State Capital building in Baton Rouge, which is a castle, the NASA Houston Space Center where the Apollo missions were managed, the site where President John Fitzgerald Kennedy was shot in Dallas, as well as the site where the TV show “Walker Texas Ranger” was filmed in Fort Worth, Texas. It was a trip back to the west coast rich in adventure and history which I look forward to sharing with my readers!