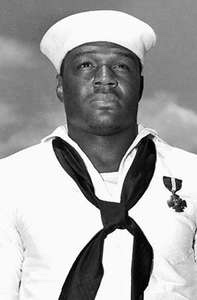 Dorris Miller was an African American Navy cook who took control of an anti-aircraft gun during the Japanese ariel attack on Pearl Harbor. Dorris Miller did not immediately receive recognition for his action and was returned to non-combat work after Pearl Harbor.