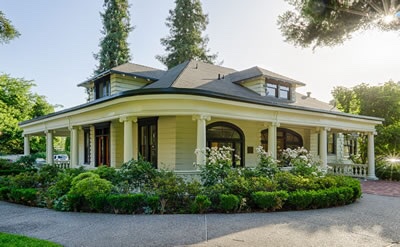 In 1866, Samuel Jamison, who arrived in California during the Gold Rush, constructed the original house, a vernacular Italianate style home, on 50-acres on Coffin Road (near Great America Boulevard. and Highway 101). The original distinctive corner quoins still remain after several additions and remodels.

Jamison served as County Sheriff, County Supervisor and State Assemblyman, as well as the President of the Bank of Santa Clara. Following his death in 1914 Jamison’s heirs sold the house and 14 acres to Alfred I. Brown, a neighbor and notable rancher. In 1919 Brown added the distinctive pillars and balustrade of the veranda that encircles one half of the home. These architectural features came from “New Park,” the residence of James Pierce and later Judge Hiram Band, which had been demolished three years earlier to construct the Carmelite Monastery. Since Jack London was a friend of Judge Bond’s sons and visited “New Park” while he was writing “Call of the Wild,” popular myth says he wrote much of this book on this veranda.

In 1936 Alfred Brown modernized his home by completely updating the kitchen and two bathrooms. During this remodeling, craftsmen from a Santa Clara mill works, Pacific Manufacturing Company, used over 100 different kinds of wood from all over the world to panel a magnificent room on the second floor. Among the rare and unusual wood used are, zebra wood, hat berry, Brazilian rosewood, Burma ironwood, Mexican laurel, boxwood, East India rosewood, Cuban mahogany, satinwood, sandalwood, teak and cascara.

After Brown died in 1943, his nephew’s family, George M. and Lois Brown, moved into the house and lived there until they sold the land to an industrial developer in 1970. George and Lois donated the house to the City of Santa Clara, which allocated $10,000 to relocate the Jamison-Brown House to its present site, the grounds of the Triton Museum.