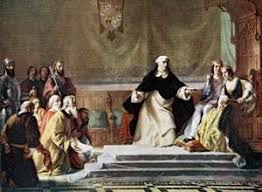 On November 1, 1478, Spanish monarchs Isabella I of Castile and Ferdinand II of Aragon asked the Catholic Pope to begin an inquisition that would purify the people of Spain, and it’s colonies. The California mission system was put into place in California in the 1700s at a time that the Spanish Inquisition was still in force. Native Americans and others subject to the missions, were jailed for acts of morality that ran counter to the Spanish moral code.

A total of twenty one California missions were built in California by the Spanish empire.