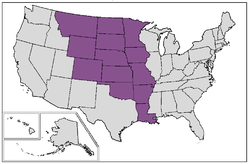 The French first settled La Louisiana, which presently consists of the the lands within the states such as Louisiana and several mid-western states. This area would later become part of the Louisiana Territory that Thomas Jefferson would purchase from the French government, to help the French finance funds needed to fight a slave rebellion in Haiti.