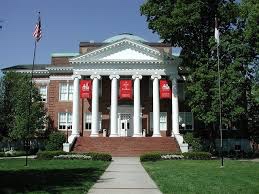 In the early 1900s, a proposal to establish a University at Lynchburg, Virginia was made. Dr. Josephus Hopwood, a President of the Milligan College in Tennessee, was brought to Lynchburg to help start a new college of higher education.

Dr. Josephus Hopwood found out that the estate of a failed resort was on sale. On April 18, 1903, Dr. Hopwood’s 60th Birthday, the former resort was purchased for $13,500 and Lynchburg University was established later that year.

Author Philip Andrew Hamilton spent time at a GOP debate held at Lynchburg University, during the 2012 to 2013 statewide Lieutenant Governor race, of Jeanmarie Davis, the wife of former Virginia Congressman Thomas Milburn Davis III, that he was a staff member of.